How to Spend 48 Hours in Toronto

This post was most recently updated on December 10th, 2019

Jerry and I are not city people by any means. In contrast, give us the wide open green spaces and we’re happy. But for a little more excitement than corn fields and pastures, it’s always fun to spend 48 hours in Toronto.

Toronto is a great city that is very spread out. There are 5 boroughs that make up the GTA (greater Toronto Area). Because of the cities immense size, expect to get around either by subway, taxi, or bus if travelling very far.

The vast majority of the things you’ll want to see are in the downtown area. Since this was mostly where we were sightseeing, and we only had 48 hours to spend in Toronto, we mapped out the walking part of our route ahead of time.

Then Jerry broke his foot. So as a result, we had to condense the amount of walking we did and rented some bikes for part of our stay.

Day One Of 48 Hours In Toronto 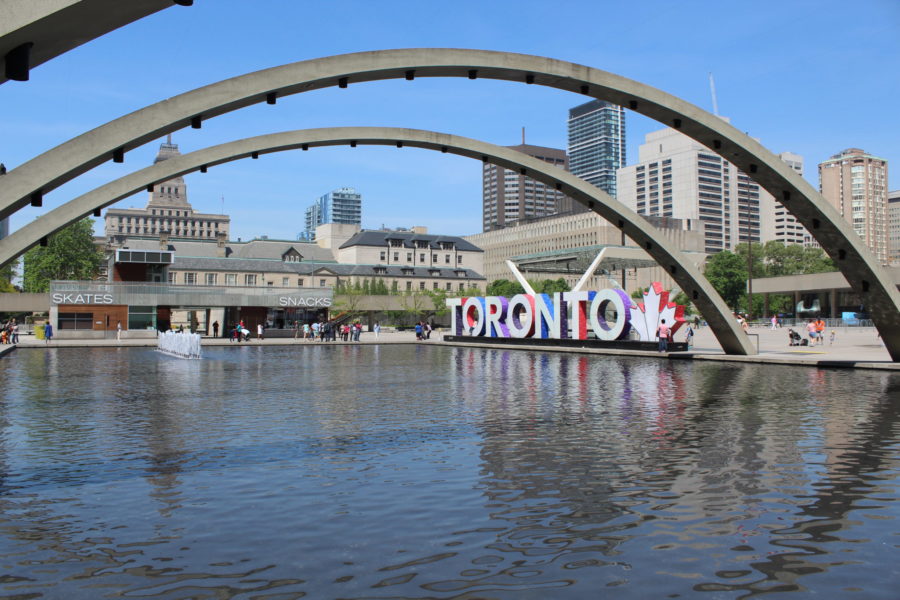 The summer is the perfect time to visit Toronto. Besides the hot weather, being able to stay in student residences while they’re gone for a few months is an advantage.

We’re in our early 50’s and saw plenty of others our age staying. So never think you’re too old. We picked the Chestnut Residence for it’s central location. It’s a very basic place to stay being a student residence. But perfect if you’re on a budget, since the costs of hotels can sky rocket in the summer. 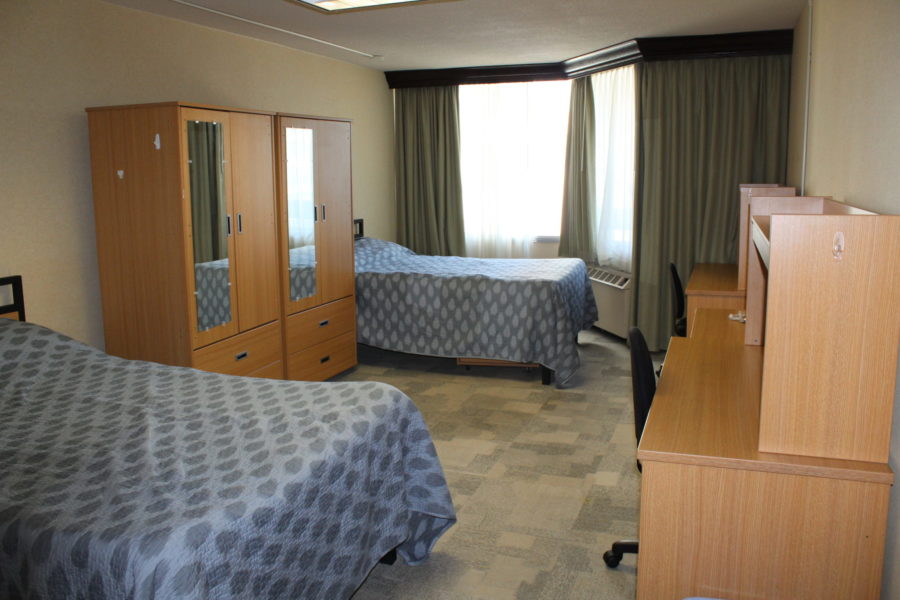 It’s a perfect locaton right in the heart of downtown. A quick 2 minute walk to Yonge and Dundas square. And if you’re travelling by bus, the Greyhound depot is just around the corner. Or by train, a short 20 minute walk. Plus it included a decent buffet breakfast. A definite bonus!

Since it was Sunday, we headed west on Dundas Street first to Kensington Market. Every Sunday in the summer they close a few streets off to cars. Then a lively and colourful market takes place in the streets. You can’t miss the street performers keeping everyone entertained while you’re browsing around this multicultural neighbourhood. 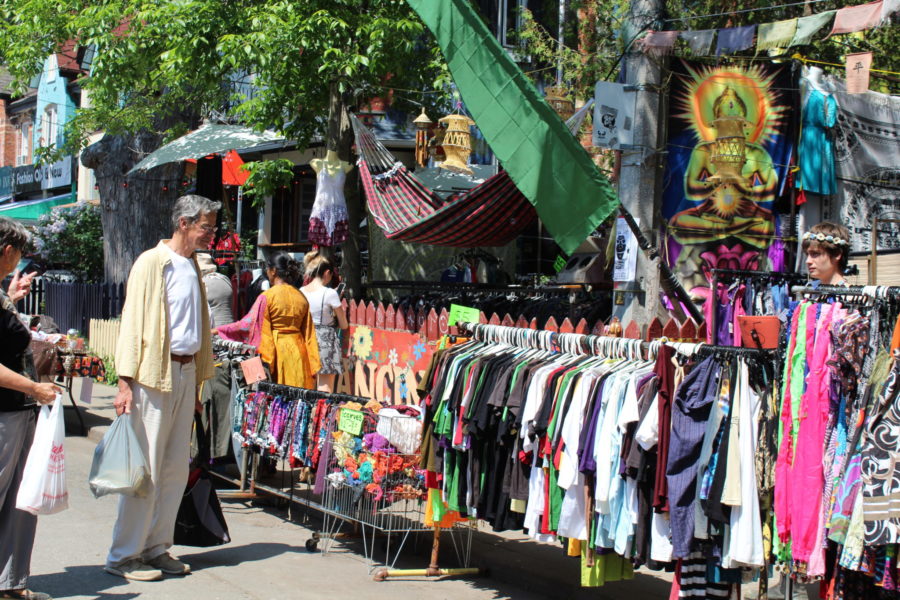 We found a stall selling coconuts for some fresh coconut water to drink. Yum! This is also a great place to try food from different cultures around the world. Jamaican, Italian, Indian, and plenty more is all found here.

After we were done at the Kensington market we headed south on Spadina Ave. This will take you through Chinatown where there’s always an interesting array of goods for sale. I wanted one of the bonsai trees. But not bad enough to carry it around all day. 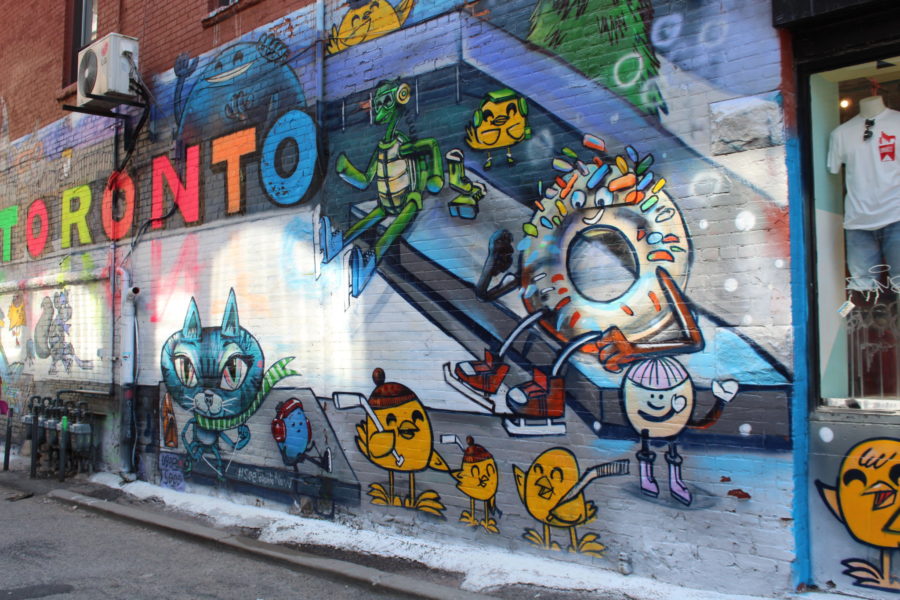 If you keep walking south, you’ll find Graffiti Alley. A great spot for some cool photos of all the street art. This definitely adds some character to the neighbourhood! 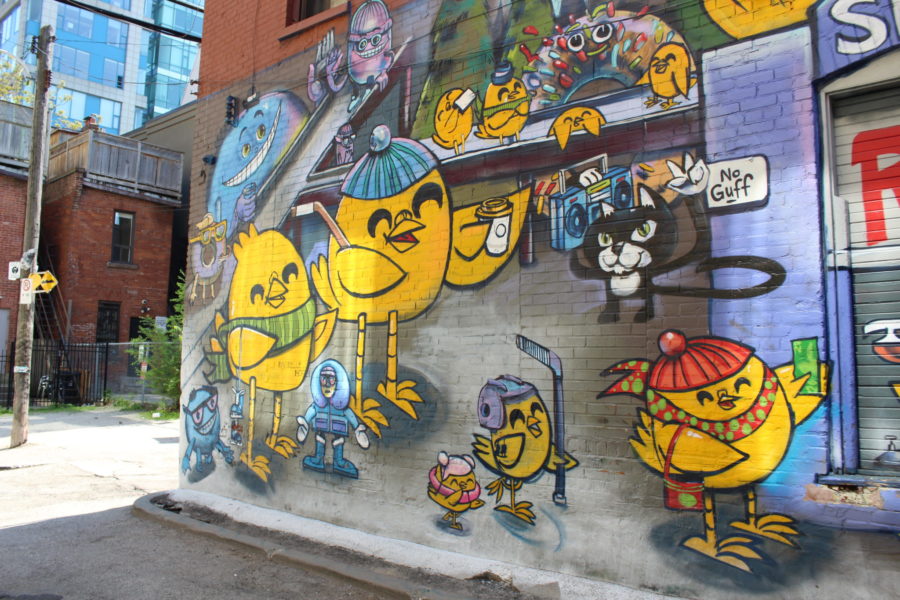 Walking farther south brings you to the Entertainment District. If you plan on visiting the top 5 attractions, we recommend you purchase the CityPass Toronto. We did, and it was well worth it. 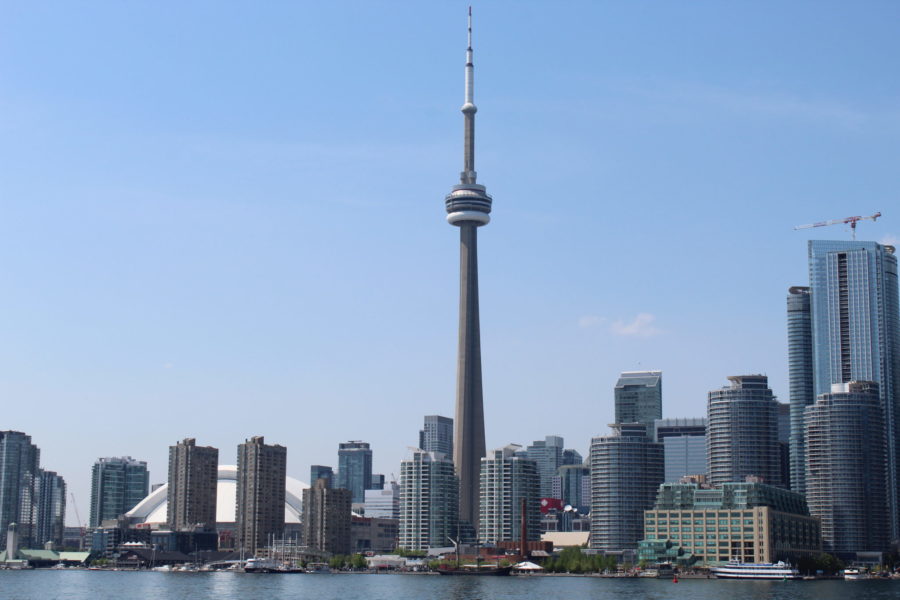 The CN Tower is Toronto’s most recognized landmark. On a clear day you can see over a 160 kilometres away from the top deck.  For the brave souls, try the Edge Walk. You will be strapped to a harness, walking hands free out on a ledge 116 stories high above ground.  I was doing well just to stand on the glass bottom floor inside. A general admission ticket to the CN Tower will cost you $38.

Just around the corner from the CN Tower is Ripley’s Aquarium. The best part is the 360 tunnel which gives you an up close experience with the sharks, octopus and other fish. This is Canada’s largest indoor aquarium and it’s open every day of the year. Adult tickets will cost you $37.

The Entertainment District is also home to the Rogers Centre. If you’re lucky you might be able to catch a Blue Jays baseball game. Another alternative is the Princess of Wales Theatre or the  Royal Alexandra Theatre depending on their schedule.

Day Two Of 48 Hours In Toronto

For $3.25 you can do a single one-way bike trip with Bike Share Toronto. This was handy right around the corner from our hotel. 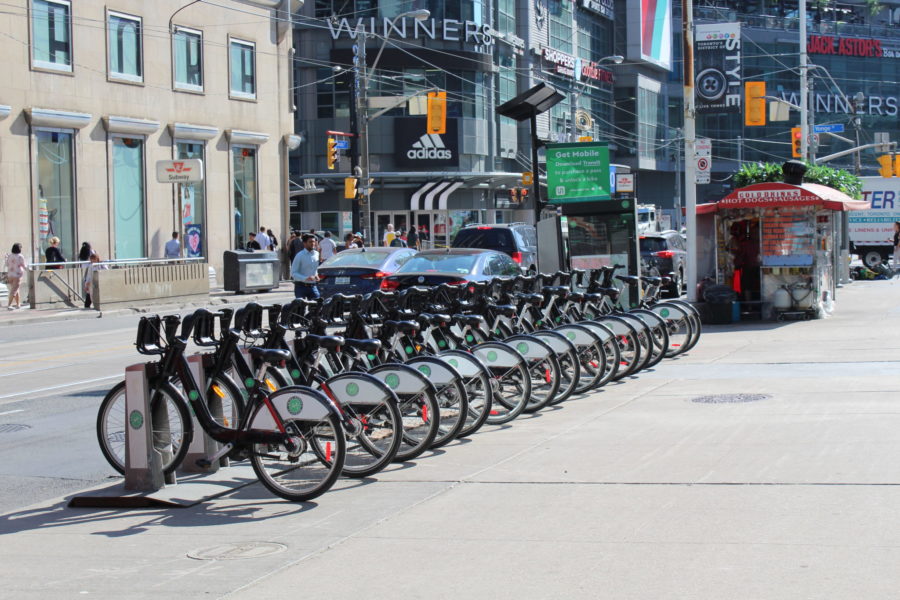 One of my favourite places to see in Toronto is Casa Loma. You can easily spend a few hours walking around this Gothic style mansion. This castle was built in 1914 and took nearly 3 years to complete.

I can’t imagine what it would be like to live in a place like this. You can even reserve the castle to use for your private function. Tickets for adults will cost you $32. But Casa Loma is also included in the city pass.

On the way back heading south just off of  Spadina Ave on Bloor St West is Eva’s Original Chimney’s. They have the most delicious ice cream cones. The Hungarian pastries for the cones are baked fresh daily. Definitely stop in and try them. They even have vegan options!

At 1 o’clock I had a walking tour booked. The tour meets on the steps of Old City Hall (just around the corner from our hotel). Jerry opted out of this walking tour because of his foot. Therefore myself and 25 of my new friends went on the tour.

It was called the Old Town Toronto History Tour by the Tour Guys. The tour was pretty interesting and lasts about 1.5 hours. It’s free,  but they welcome tips for whatever you think it was worth.

It ends near the St Lawrence Market. Unfortunately the market was closed on the day we were there. We always love checking out the markets in a new city. And this one’s been in the city for over a 100 years. It’s a great way to meet some of the locals. And also you really get a feel for the town by visiting their market. Plus you could pick up some tasty food for lunch.

Heading east a few blocks will bring you to the Distillery Historic District. It’s called the Distillery District, but it’s more of an arts and culture scene.  Plus there are plenty of restaurants, cafes, bars and shops. This is one of my favourite areas in the city to spend some time.

Next I walked west on Front St and then south on Bay St to the Toronto Island Ferry dock. It’s a beautiful walk along Toronto’s waterfront next to Lake Ontario. This is where I met up with Jerry so we could take the ferry over to Centre Island. The cost is $7.50 for adults and includes your return ticket. 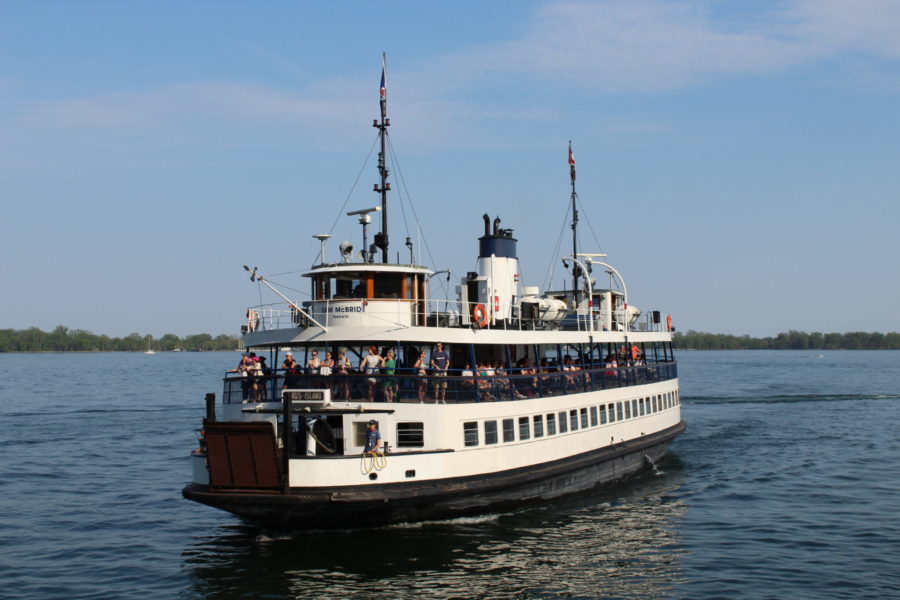 It was our first time visiting the island and we absolutely loved it. It’s such a peaceful and tranquil atmosphere away from the hustle and bustle of the city.

No cars are allowed on the islands. So you have the option of walking or cycling. Plenty of locals bring their own bikes over for the day.  We rented a couple bikes from Toronto Island Bicycle Rental and toured around. There are several small islands connected by bridges that you can check out. 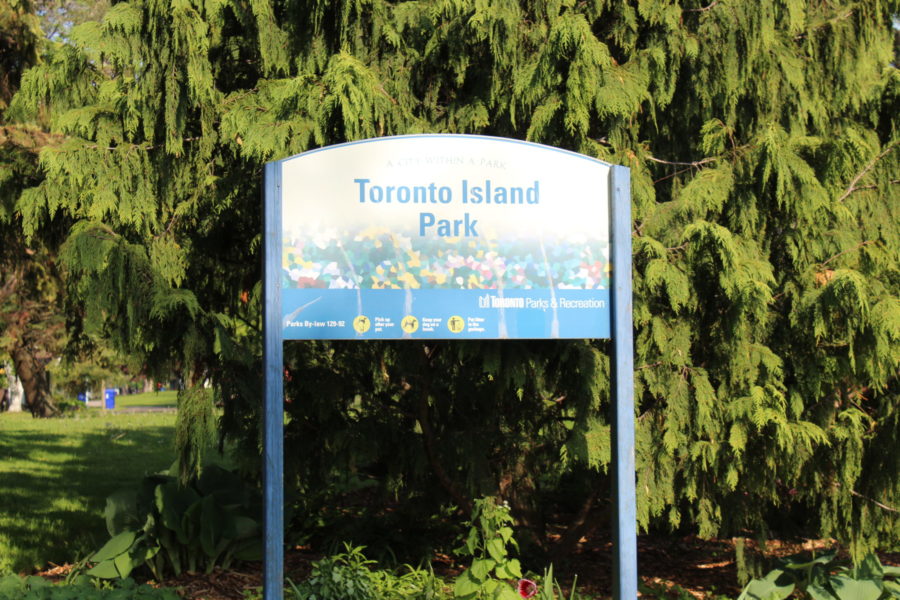 Then if you want to stay overnight on the island, you could rent one of the cottages or Bnb’s. There’s a good choice of beaches to relax on. Or you could grab a drink and food at one of the islands restaurants. Toronto Island BBQ & Beer Co seemed to be the most popular one. And had the best views of the city. 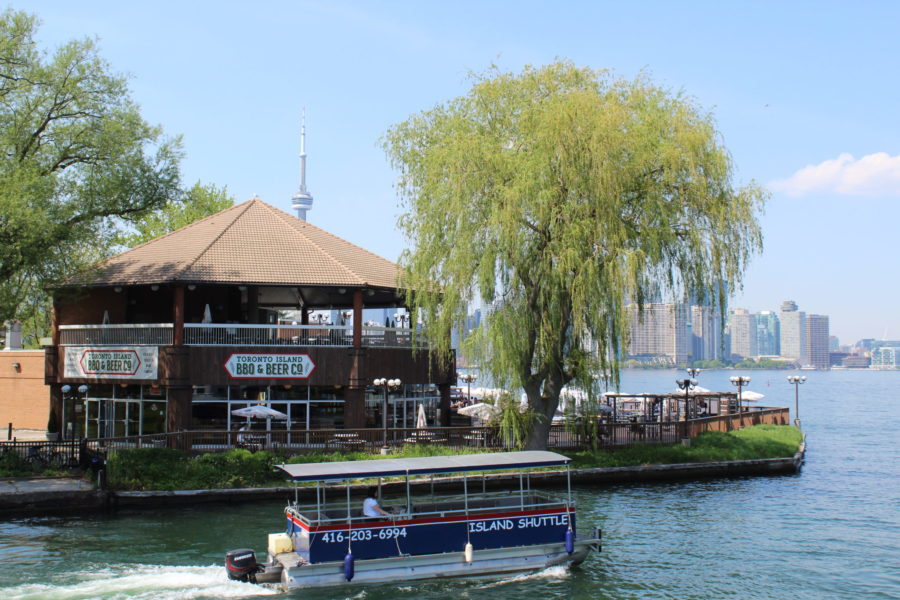 At night the Winter Garden Theatre around the corner from our hotel was showing the popular musical Grease. 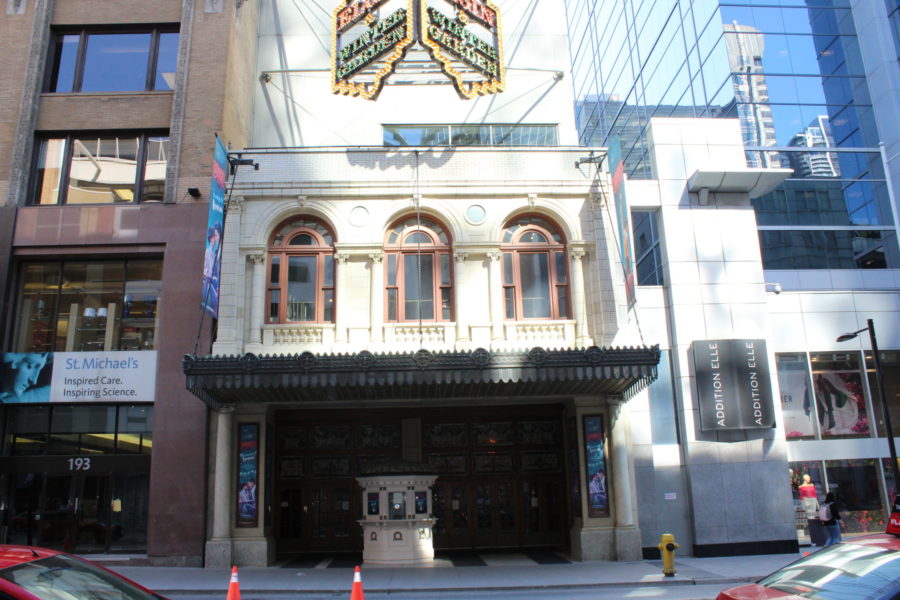 48 hours to spend in Toronto isn’t a lot of time. But by planning ahead and mapping out your route, you can cram in a lot of the major sites. If you have more than 48 hours to spend in the area, I’d recommend doing a two day trip to Niagara Falls. Click here to read all about our trip to the Falls.

48 Hours In Niagara Falls: How To Spend Your Time

Best Shoes For Standing All Day